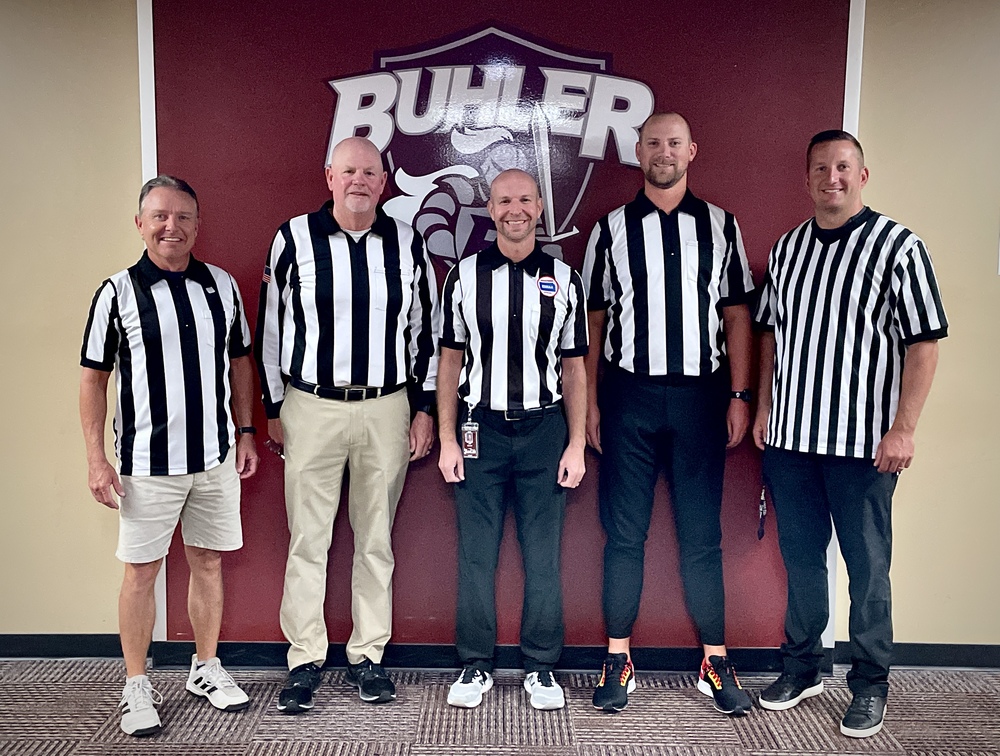 by the BHS Sportswriting Class

Buhler, KS - Walk through the main hall of Buhler High School on a Monday morning, and you are likely to find a group of educators talking about Friday night's game. They are not coaches or fans, they play different roles in those games as sports officials.

Without sports officials, high schools across Kansas cannot play games. According to the New York Times, nearly 20% of all officials quit every year.

The National Federation of State High Schools says that over the past three years, about 50,000 referees across the country have hung up their whistles.

These five officials have 91 years of combined experience. They officiate football, basketball, and summer baseball.

The reasons why they officiate vary.

Brenan Torgerson spoke about how being involved as an official allows him to stay involved in a sport he is passionate about. Retired teacher and coach, Kyle Side shared the same sentiments.

“I officiate because I enjoy staying involved in the game. Once I stopped coaching, I decided officiating would be a good way to continue enjoying high school sports. I had officiated while attending college so I had some prior experience to help me. It's also a nice way to earn a little extra money and stay physically active. Officiating is a great way to meet new people. It's also a great way to grow as a person as you learn to deal with coaches, players, and fans,” said Sides.

Prairie Hills Middle School teacher Jeff Voss also officiates. He shared, “The best part is working with young athletes and seeing the different skill levels of athletes. By working games, it also gives [me] a chance to be part of a team community. [My crew] has worked together for a long time. We understand each other and what our different responsibilities are.”

“It’s another way to work with kids in a different area.”

These officials also expressed some of the negative aspects of being sports officials.

“The hardest part is probably verbal abuse by the fans,” said Kohls. However, he noted that he feels it has gotten better in recent years.

Justin Seuser who officiates college basketball and serves as Buhler High School’s Athletic director shared that a negative is late games that start at 8 o’clock at night, followed by a couple- hours-drive home.

History teacher Aaron Deitchler joked, “I do not like the running, getting cleated, or when [athletes] hit me [during a play].”

One aspect that all of these educator-turned-officials agreed on was that being a sports official was an easy way to make some extra money. While the level of play will determine one’s pay, a sports official can expect to make about $85 per varsity game.

Officiating games is not typically a person’s full-time job. Officials typically call games in the evenings or on weekends.

“I usually officiate 1-3 times a week, depending on the season,” said Torgerson.

“Make sure to learn all the rules of the game, not from when you played,” said Kohls.

“I would tell people who are considering getting involved in officiating to contact a local official to help them get started,” said Sides.

For those interested in becoming sports officials, they can find a local mentor, contact their local Athletic Directors, or contact the Kansas High School Activities Association at kshsaa.org or (785)-273-5329.