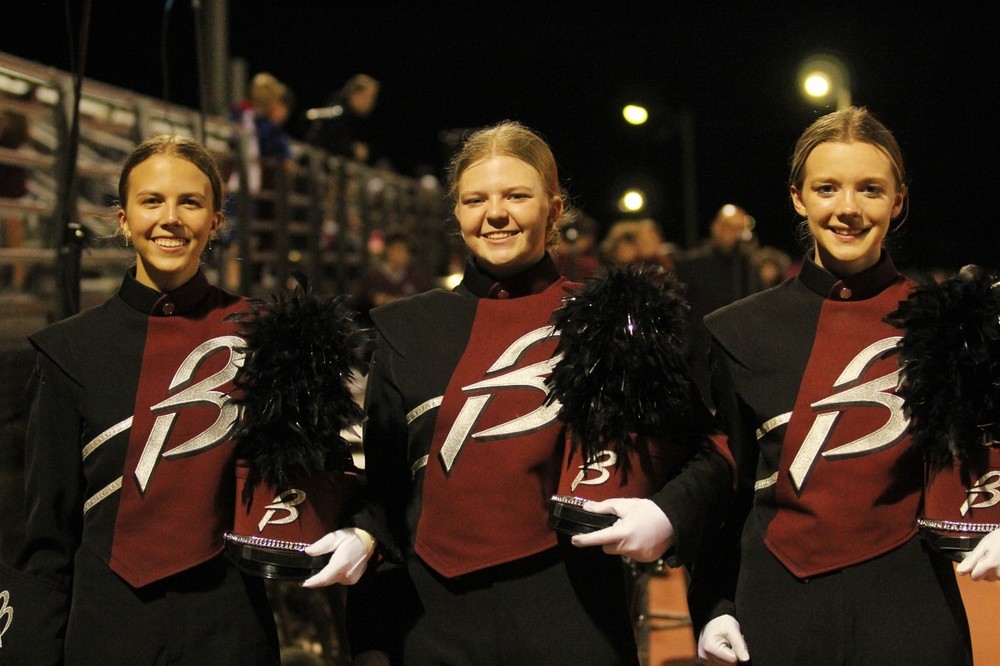 Buhler, KS - The BHS Marching band has a history of great shows.

Senior band leaders have been in marching band for 4 years, and tomorrow night they will have their last performance at the home football game.

Seniors know what to expect because they are experienced in marching. They have spent their time in high school band playing their instruments and practicing. They practice to get better so that when they step out on the field, they are ready to represent something bigger than themselves.

Looking back over 4 years, many shared their favorite memories.

“My favorite memory was last year at the Shawnee Mission Marching Festival. Standing up on the track hearing them announce that we won not only first place but most of the captions as well made me so proud of myself and the band,”  said senior Drum Major Lilly Coldren.

“My favorite show has to be Untold (2019). It was my freshman year and I was so happy to be a part of the band,” said Coldren.

Many shared why band is special to them and why this year’s show means so much to them.

“I know many friends and family who are in the military and I want to join the Air Force at some point in my lifetime. The show this year just really speaks for itself,” said senior flute Samantha Hulse.

“My favorite part about the show is that we are representing something bigger than ourselves!” said senior trombonist Allison Goans.

The 3rd movement in this year’s show is many people's favorites.

“My favorite part of the show is where we are in a diamond and we start quiet and build up and get into the cross set where it’s such an impactful moment for the band and the viewers,” said Hulse.

“My favorite part is 3rd movement during the big impact moment, we just added it and every time it gives me goosebumps,” said senior tuba player Brian Regier.

“The brass has their little feature that leads into the big company front. It's such an impactful moment that I think is really going to tug on the heartstrings of the audience,” said Coldren

“The long chords and light melody are so much fun to conduct,” said senior drum major Camri Coker.

These seniors know that this season goes by quickly, but they want to make the most of it.

“I’m also sad that I will be leaving the Buhler marching band. This is the best group of people I have ever worked with,” said Hulse.

“We have a strong band right now and I’ll be going out on what I think will be the best show in my 4 years,” said Regier.

“Honestly it feels like time has gone by really quickly. I’m super excited to graduate, but I’m gonna miss a lot. I’ve made a ton of memories in band, the fact that it’s ending is just surreal,” said Coker.

“It feels very bittersweet for it to be my last year. This is something I've put my heart and soul into for the last four years so having it come to an end makes me a little sad but I'm so excited for the show this year,” said Coldren.

This past Saturday, these seniors took the field with the rest of their bandmates to perform at KBA. In prelims, They got 1st in their division, best music, and best percussion. In finals, they took 3rd overall.

The Buhler High School football team plays Ark City at home, this Friday at Crusader Stadium. The marching band will be playing their final show and providing pep band music during the game.