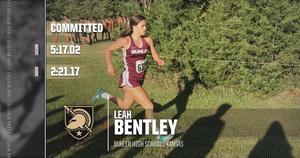 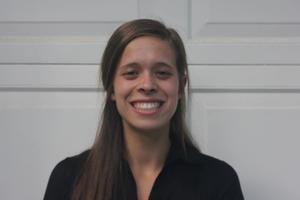 Buhler High School senior Leah Bentley has been accepted into West Point, the prestigious U.S. Military Academy in West Point, NY. West Point was selected by General George Washington as a strategic fortification during the Revolutionary War and established as the U.S. Military Academy by President Thomas Jefferson in 1802. It is well known for its long history of producing many of the nation’s most successful leaders.
The school has some of the most competitive admissions standards in the nation and an extremely rigorous application process, resulting in an acceptance rate of less than 10%. The rewards of being one of the elite to be accepted are significant, with students receiving a fully funded undergraduate education comparable to top-tier Ivy League Schools. To be considered for acceptance, students must interview with and receive at least one nomination from a member of Congress. Leah not only received nominations from Senator Jerry Moran, Senator Pat Roberts, and Congressman Roger Marshall, she also received the Principal Nomination from Sen. Moran. A Principal Nomination to West Point is only offered to one candidate in the state and grants guaranteed acceptance if the candidate meets the minimum requirements for admission.
“Hearing that I was accepted to West Point was by far the most exciting thing that has ever happened to me, it’s hard to even put into words how honored and grateful I am to have such an opportunity,” Bentley explained, “I know it’s going to be challenging, but I thrive on that, and I truly believe it is where I belong”.
With West Point’s focus on identifying candidates that have excelled in both academics and athletics, it is clear that the school hit their mark with Leah. In addition to maintaining straight As for her entire school career, Leah’s athletic accomplishments are astounding. She holds numerous school records in Volleyball, Track and Field, and Cross Country, as well as all-league and all-state honors in all three sports. Leah is known by her friends, teammates, teachers, and coaches as extremely driven and dedicated, able to excel in everything she does. Leah’s track coach, William Adkins pointed out, “I have been coaching and teaching for more than three decades, and when you meet someone like Leah, they leave an indelible impression on you. She certainly catches a great deal of attention because she is a multiple school record holder, a highly competitive and successful student/athlete and she is a valued member of any and every team.”
While at West Point, Leah will be continuing her running career, competing on their Division I Track and Cross Country teams. Leah will be a member of the West Point class of 2025 and will be reporting in June 2021, when she will begin 6 weeks of basic training. Leah plans to major in American Politics and ultimately pursue a career in the Judge Advocates General Corps serving the Army as an attorney.